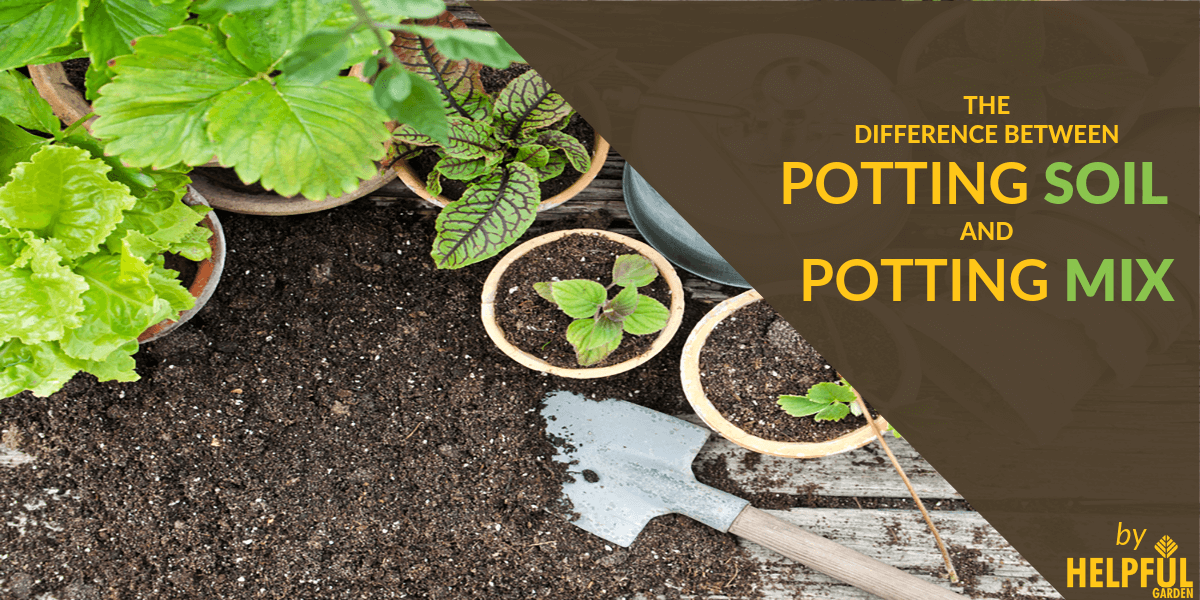 Life is chock-full mind-bending mysteries. The difference between potting soil and potting mix is not one of those mysteries. All jokes aside, it’s still a very important question for those who are looking to get serious about planting.

The reason this subject gets little tricky is that both terms are often used interchangeably, but wrongfully so. Before we go any further, let’s set clear definitions for the words we’re using.

Potting soil is basically just soil. It is also called topsoil, which is honestly a better term. It’s what many would call dirt; the stuff that covers the top layer of the Earth from which grass and trees grow. Things get more confusing when you learn that you should not use potting soil in plant pots.

A genuine, high-quality potting mix consists of no soil whatsoever. “Soil-less” is a term you’ll hear a lot and one you should remember. It’s made up of peat moss, bark, perlite, and other organic matter. You might find brands that do have soil added to the mixture but steer clear as that’s a sign of lower quality potting mix.

The Advantage of Potting Mix Over Potting Soil

Potting soil (topsoil) is great for outdoor gardens or flower beds where your plants have lots of room to grow and spread their roots. It’s the perfect growing medium for plants in their natural environment and can be enriched with nutrients to provide an extra boost.

Potting soil becomes a problem when you’re attempting to grow a potted plant. Potting soil is very dense and will become overly compact with regular watering. Roots will have difficulty spreading when the growing medium becomes too hard, and water will not drain easily. Your plant will be in danger of drowning.

Potting mix is ideal for pots because it’s fluffy, not dense. Roots have lots of room to spread and intertwine with the materials in the potting mix. The fact that it’s nice and airy allows excess water to safely make its way to the bottom of the pot and out of the drainage holes.

A big difference between garden soil and potting mix is that potting mix has many larger pieces of material throughout. These big chunks prevent the mix from compacting too tightly. The material still hasn’t fully decomposed yet, meaning there is a lot more elasticity.

There are a lot more nutrients in the potting mix as well. It’s made of relatively fresh material that has never grown plants before. Soil loses most of its nutrients from plants constantly draining them. Adding nutrients can help potting soil, but it’s most effective in a garden where a bad nutrient ratio won’t cause as much damage to your plant.

Can You Replace Potting Mix with Potting Soil to Save Money?

The short answer is no. Technically you can, but that doesn’t mean you should. It’s true that potting mix is much more expensive than potting soil, but resisting that temptation might save you a headache and a lot of wasted time.

If you really want to save a few bucks, start out by trying potting mix with a bit of soil as one of the ingredients. While this isn’t ideal, it’s easier on the budget and is better than straight soil.

If you happen to go this route, make sure to keep a close eye on the little guy and provide extra care. Different types of plants will have an easier time growing in soil than others, so make sure to do a little research on your preferred species to make sure.

Final Thoughts on The Difference Between Potting Soil and Potting Mix

Now you know why the world needed this article explaining what's the difference between potting soil and potting mix. Such a simple concept made unnecessarily complicated by the language we use.

Both are important in their own right. Potted plants need to breathe, and that takes place in the roots. Pots being so confined, none of the roots can escape if your growing medium becomes waterlogged.

Saving money upfront sounds wonderful at the time, especially when the places selling the stuff don’t make enough of an effort to properly explain the difference. That saved money could turn into added expenses when you need to replace your dead plants and go back for real potting mix.

You don’t have to worry about any of that, now that you’re an expert on the difference between potting soil and potting mix. Happy growing!

Helpful Garden is a participant in the Amazon Services LLC Associates Program, an affiliate advertising program designed to provide a means for sites to earn advertising fees by advertising and linking to amazon.com

This website uses cookies to improve your experience while you navigate through the website. Out of these, the cookies that are categorized as necessary are stored on your browser as they are essential for the working of basic functionalities of the website. We also use third-party cookies that help us analyze and understand how you use this website. These cookies will be stored in your browser only with your consent. You also have the option to opt-out of these cookies. But opting out of some of these cookies may affect your browsing experience.
Necessary Always Enabled
Necessary cookies are absolutely essential for the website to function properly. This category only includes cookies that ensures basic functionalities and security features of the website. These cookies do not store any personal information.
Non-necessary
Any cookies that may not be particularly necessary for the website to function and is used specifically to collect user personal data via analytics, ads, other embedded contents are termed as non-necessary cookies. It is mandatory to procure user consent prior to running these cookies on your website.
SAVE & ACCEPT